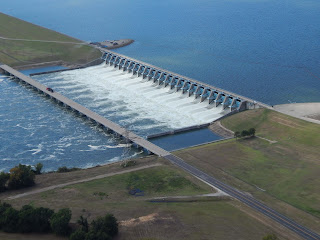 If you've been on Richland Chambers very long you've seen  ups and downs, highs and lows and in-betweens.  Some folks came here and built just in time to see 5 tough years. While some have been here only long enough to enjoy very good years. One thing for sure, fluctuation is a part of life on RC Lake. Actually folks on pretty much every Texas lake experience fluctuation. When we have normal rainfall, lake levels are good.  Less rainfall means lower lake levels. It's really pretty simple. The Great State of Texas could not support even close to today's population without man made reservoirs catching the rainfall. The ability to store water in many places in the United States allows large populations to thrive. Our modern standards and lifestyle require vast amounts of the most precious natural resource we have, water.  Richland Chambers lake, like most every man made lake, has had its ups and downs depending on water falling from the sky.
Time on Richland Chambers can be measured by pre-March 11, 2015 and post March 11, 2015.

March 11, 2015 was the day the lake hit 315' and stayed after almost 5 long years of Texas drought. During the period from late 2010 to March of 2015 we experienced 3 of the lowest lake levels in the 30 year history of Richland Chambers. Then a lot of water fell from the sky and regularly continues to do so.
So here comes the nerd part... The average lake level during that time was 309', 6 feet low. Since March 11 2015 the average lake level has been 313', a level we can all appreciate. But, 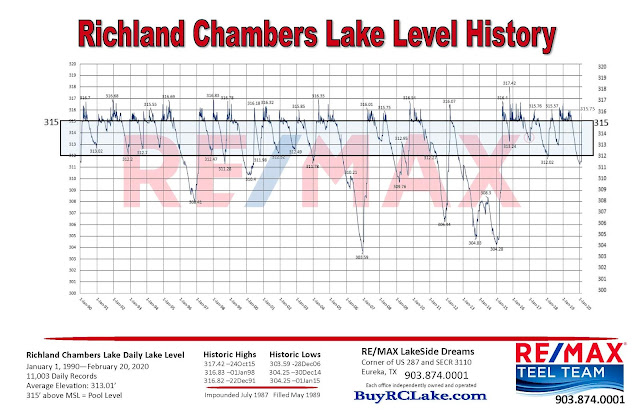