What about the Green Boat? 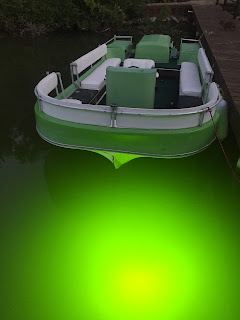 I blogged last summer about the "Green Eyed Lady of Richland Chambers".  It's a 1978 model, lime green "The Deck Boat, Gatesville, Texas".   I acquired it very cheap and now I see for good reason.  But nothing ventured, nothing gained right?   So what about it?   Well as Paul Harvey used to say "and now, the Rest of the Story..."

Old boats are not always what they are cracked up to be.  But the coolness factor is very enticing.  I have great memories as a kid running around in these kind of things with my dad at the wheel.  He always had some old boat he was working on. We would launch on Lake Arlington, Ray Hubbard or Lake Dallas (now Lake Lewisville) and have fun.  Plus retro is in these days so what could be cooler than a vintage 70's model boat (one they don't make any more) running around on Richland Chambers?   Sounds great, right?  Yeah, well all true if the boat is worth the effort.  Most old boats are not worth a lot, of course there are exceptions, but if you want an old boat I bet I can find you one real cheap! 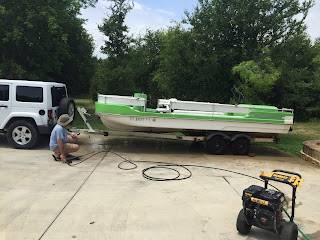 Saying all of that, the saga of the "Green Eyed Lady" has come to an ignominious, inglorious end.

When we first got it we cleaned it up and took it to TJ with Lakeside Boat Service. He checked it out and made sure she was somewhat lake worthy.  So one afternoon we put it in the water and ran around the cove a few times.  All was well and heading towards what seemed to be a fun project with a lot of coolness factor.  Feeling confident, Julie and I headed out one afternoon last fall.  We took off out of the cove and headed up the Chambers arm of Richland Chambers.  Julie was on a Seadoo with a tow rope just in case.  I got some interesting looks and comments from some friends on their docks along the way.  We made it up as far as the pump station and decided to head back.  After a few minutes all of a sudden she lost power.  I turned and looked back saw  smoke coming from the engine compartment.  Of course I shut her down.  I now know I had spun the connector between the engine and the outdrive.  Good thing we brought a tow rope!  We made it back to our dock, tied her up and the next day went to see TJ.


To shorten the story a bit, back to the shop, new engine connector some other things and early last March back in the water.  Our son Parker and I took off again.  Same thing, around the cove a few times and then headed out to the open water past the jetty.  We didn't get very far and I turned around to come back in.  Then the same thing happened, we spun the motor connector.  After a lot of paddling and somewhat favorable winds we made it to Northshore Marina and tied it up in a slip.

The bottom line turned out to be the condition of the boat itself.  A lot of older fiberglass boats have a considerable amount of wood in them surrounded by fiberglass.  We knew there was some wood rot in the transom and now feared it was in really bad shape.  We could tell by the 'play' in the transom and the fact that the motor connector had failed twice.  When TJ opened it up the whole transom was basically nothing but mush.  He did some checking around about repairing it properly (so it and yours truly would not wind up at the bottom of Richland Chambers Lake!).  However, it turns out to repair the transom and surrounding hull properly was going to be very expensive.  All of a sudden the "Coolness Factor" diminished dramatically. Funny how it works that way sometimes.

So now I've gone through my grieving period and headed off to the next thing.  But I have to say we all found a little bit of joy in the whole idea and for me, the very short time I drove it around I did feel really cool! 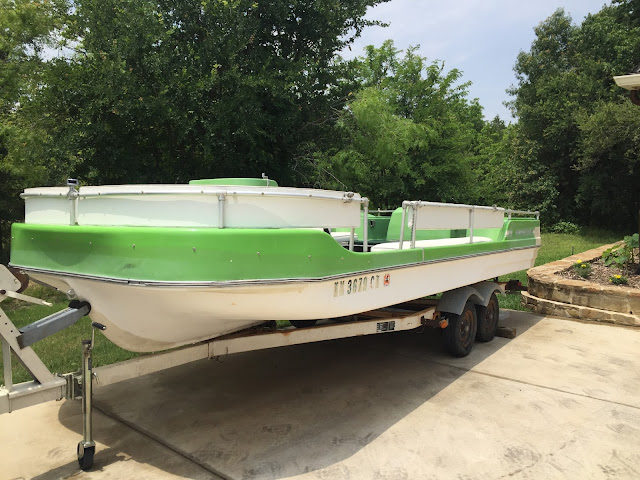 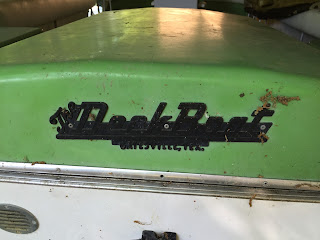 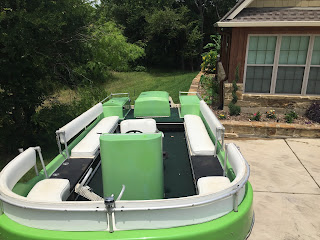