On Mother's Day the weather was great and Julie and I found ourselves at home with little Mother's Day fanfare so it was time for a SeaDoo adventure.  So we loaded up and took off.  We decided to follow the shoreline from our dock heading northwest as far as we cared to go.  We explored every cove and creek we could find and took our time taking in the sights.
First to Northshore Harbor, then around Moonlight Point to Collins Lane and White Rock.  We headed north under 287 bridge to Oak Cove Marina.  We came around to Paradise Bay and talked to some friends, Brent and Brenda and then on to Hidden Oaks.  Vista Ridge was next and then up the creek in Lakeview all the way to the 3140 bridge.  We came out of the creek, after slight technical difficulty, and headed into Mattie Caston.
Mattie Caston Cove is kind of tough to navigate in a boat as there is a lot of timber in the water.  We took it easy and slow and made it all the way in.  We came across a huge Osprey Nest with a pair of Ospreys patrolling and defending the nest from overhead.  We saw a lot of homes and docks we have never seen from the water.

Here is our course:


We continued on north through Starcrest and then under the 2859 Bridge around to Hide Away Harbor.  Hideaway Harbor is named very well. This quiet neighborhood is tucked away just north of the bridge.  We came across our old boat tied up to TJ's dock, in good shape.

Our adventure had started about 2:30 so by now we started thinking about heading back and actually had a couple of destinations in mind.  The first stop was to go find a big nest in the trees we knew about north of Hickey Island and check it out.  The lake was perfect, the wind was fairly calm and the sky was beautiful.  Our Seadoos were running great.  Julie's is a 2009 Seadoo Wake and mine is a 2010 Seadoo 215 Wake Pro.. We bought both of them new and they have been very good machines. 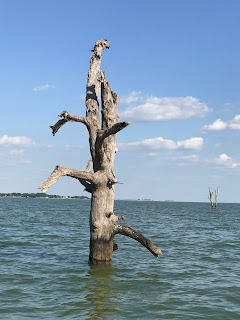 Our next stop was Hickey Island.  We made our way in to the south side of the island, beached the Seadoos and had a picnic. The seadoos have plenty of room to carry drinks and snacks.   The Island is pretty large (maybe 300 acres?) and we found a pretty nice, small beach area.  Hickey Island is completely grown up and there is all kinds of wildlife running around on it.  We didn't venture too far from the shore, just enjoyed the view and took it all in.  Next we shoved off and headed south. 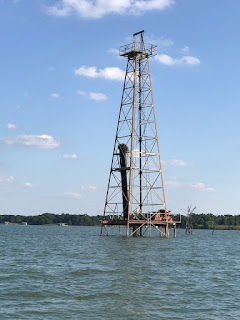 The last big adventure of the day was to visit the Oil Derrick south of the island off of Vista Ridge.   The rig doesn't appear to be functioning, but then again I'm no expert.  There was another big Osprey nest up in the rig and the pair were circling around while we were close.

It was getting late in the day by now so we headed on back to The Shores and docked the Seadoos.  It was a great afternoon!