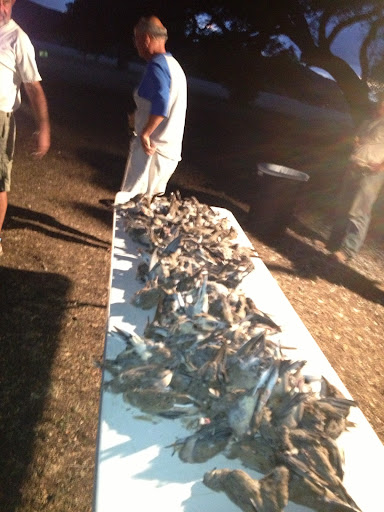 Alright I know this is not about Richland Chambers but it is about having a lot of fun with some great guys who live on the lake.  I was invited to go on a dove hunting / golf trip down in south Texas outside of Uvalde not far from Concan right on the Frio River.  What a great time.  The hunting was fantastic. We had great guides, lots of birds were flying and several of the guys shot their limit a couple of days.
The golf club is called the Club@Concan and is ranked 21st of the the top 50 courses in Texas. We played two mornings in an absolute picturesque Hill Country setting with beautiful weather. During our games we saw multiple deer, some turkey and bobcat tracks in the sand bunkers.
The lodge we stayed at is called Margaritaville and was just right for our group of 17 hunters/golfers. It is owned and operated by our outfitter, Frio Country Ranches
Clint Arthur is the gentleman's name who was running the show and he and his team did a great job taking care of us.  We golfed in the morning, hunted in the afternoon and ate like kings every evening.  I highly recommend these guys and look forward to going next year. (I have got to practice my shooting for next time, both birds and golf!)
Posted by John Teel at 11:03 AM