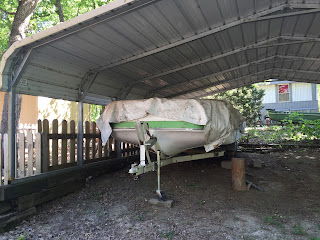 Yeah it's a little corny but go with it....I didn't come up with the name.


I tend to be a little nostalgic and somewhat sentimental about things. I appreciate and enjoy new technology, new vehicles, new boats... however there's definitely a soft spot for cool things from the past.  Saying that, I've acquired a 1978 model "The Deck Boat".  It was sitting under a carport on the South Side of Richland Chambers at a house we listed. I made a deal with the owner and poof! it's mine. 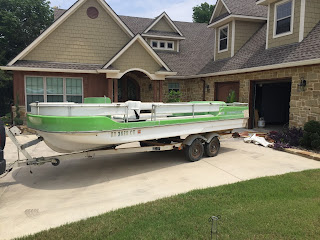 The first "The Deck Boat"s were built by Anchor Plastics in Gatesville, Texas in about 1969.  When they came out they were the first of their kind. Big, flat, wide bottom and lots of room on the deck.  A revolutionary design for consumer boats. They came with outboards or inboard (usually Chevy) motors with a MerCruiser Stern drive.  By the mid 90's the company sold and manufacturing, design and branding went other directions. "The Deck Boat Gatesville Tex." now exists in the boats that are still out there making a splash, so to speak... 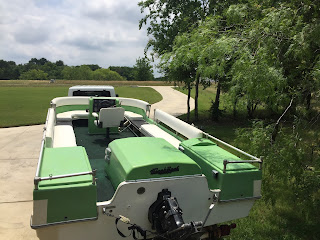 This model is 19 ft, has a center console and is low profile. It has seating all the way around and for the most part is in pretty good shape.  I took it to TJ up the street at the boat shop to check it out. He showed me where it needed some work on the transom. I have come to learn and it makes sense, some of the wood in these old fiberglass boats will rot over time.  The thing is older than my kids by far, so it's to be expected.  TJ says its soon to be fixed and ready for the water.

My Plan is to put a pretty good sized trolling motor on the front with GPS capabilities and most likely a second battery.  I would also like to have a good GPS fish finder with all the cool stuff on it.  I'll need to do some modifications to it like putting in storage and rod holders. Also there are some electrical things that will need to be done. My friend Michael Landon has a 1994 model deck boat he has restored with a 150 HP Evinrude HO outboard on it. The picture below is on his boat back in the winter.